My blue cheese of choice for a Scottish cheeseboard is Arran Blue from the Bellevue Creamery on the Isle of Arran.  This semi-soft offering was voted the ‘Best Scottish Cheese’ at the 2017/18 World Cheese Awards – the largest cheese competition in the world.

What’s really cool about Arran Blue is that it’s the only blue cheese produced on the Isle of Arran and is made using the milk from the island’s own cow herds. 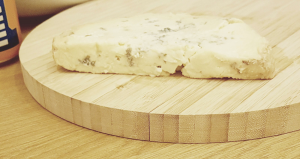 Bellevue Creamery is a small batch artisan producer who specialises in soft creamy cheeses.  As well as Arran Blue they also produce a Camembert and Brie which also picked up awards at the World Cheese Awards.  For such a small producer up against the largest cheese producers in the world, this is a remarkable achievement.  They attribute their success to the quality of the milk on the island and the unpolluted environment.

Bellevue Creamery was established in the early 90s and was purchased by the Island Cheese Shop owner Gordon Kinniburgh in 2004.  The modern creamery is a converted milking shed nestled in the sleepy village of Blackwaterfoot in the heart of the island’s dairy land.  Unfortunately, it isn’t open to the public like other creameries on the island but you’ll be able to buy the cheese from the shop or online.

Arran Blue is made from 100% pasteurised cow’s milk and vegetable rennet so it’s suitable for vegetarians.

This award-winning cheese is a young, mild and creamy cheese, very similar to the French Blue de Auvergne.

How to Enjoy Arran Blue

I like to enjoy Arran Blue on an oatcake with a slice of apple or pear.  It works well with sweet wines such as Port or a dessert wine but then again you can never go wrong with a big glass of red.